Our latest story comes from Afghanistan where writer Hizbullah Khan speaks with a new wave of women hoping to lead the country’s peace protests.

While restrictions on women’s rights in Afghanistan are well documented, Hizbullah’s interviews find 300 female peace activists who are building a country-wide network to make their voices heard.

His report sits alongside photographs from a rare protest by women and girls in Helmand, a Taliban stronghold, following a bomb which killed and injured dozens of people.

The protest (and a subsequent peace march) helped to encourage, for the first time since 2001, a three-day ceasefire between the government and the Taliban over Eid.

Inspired by this success, hundreds of women across Afghanistan have pledged to join a peace campaign, linking women in cities with their counterparts in rural communities.

Despite facing challenges due to Afghanistan’s cultural taboos, the women plan to use their traditional role as mediators to open dialogue with tribal elders, legislators and with Taliban households.

And one of the protesters is calling for Afganistan’s president Ashraf Ghani to make room for them at the negotiating table. 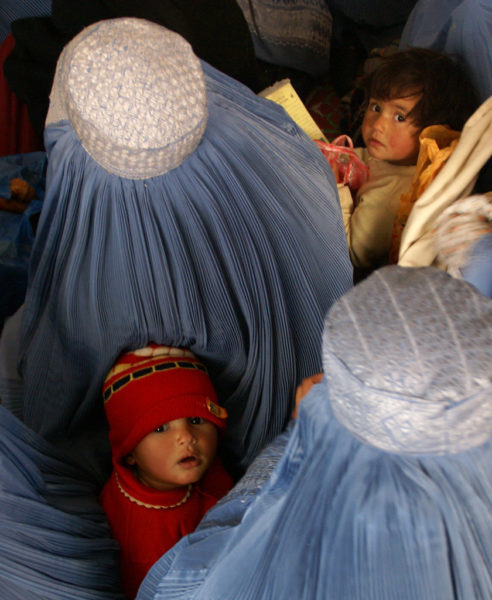 Could women spearhead a new protest movement to bring peace to Afghanistan? Image by Direct Relief

Just yesterday (4 Feb 2019) the Afghan Women’s Network issued a six-point agenda to this week’s peace talks in Moscow where the Council of Afghan Society has brought together the Taliban and Afghan politicians opposed to President Ashraf Ghani.

Afghan women have always been peace makers, be it at home, the community and nationally. They have rarely utilized violence to reach their aims, even when they were, in the course of civil war, raped, killed, mutilated and made to leave their homes.”

And continues: “You do not have to be a woman to defend women’s rights! We are your partners in the development of the country, as such you have to use your male privilege to fight for our interests too.”

The sit-in protest in Helmand has been particularly significant not only because women were involved but because the province has been a Taliban stronghold.

But since 2001, women have held other protests, mainly in Kabul, which have gained international media attention.