Earlier this year a hospital doctor was acquitted of carrying out female genital mutilation on a patient after delivering her baby. The case attracted huge media and political interest because it was the first ever prosecution since FGM was outlawed in the UK in 1985.

The charge, brought last spring, came after a wave of parliamentary reports, ministerial pledges, media campaigns and new guidelines from the Crown Prosecution Service for England and Wales. As such, much hope was invested in this prosecution. Perhaps too much.

Yes, it is desirable to prosecute, but prosecution doesn’t equal protection for girls and women subjected to cutting. It means a case where FGM hasn’t been prevented. It is not enough for the government to spend all its efforts combating FGM chasing prosecutions. What’s needed is time and money spent on community programmes that prevent FGM happening at all. Despite all the attention heaped on FGM in the last few years, with victims coming forward to tell their stories, parliamentary committees carrying out investigations, the CPS guidelines in 2011, there has been little public dialogue about how to effect change. How do we stop FGM happening?

For more than 30 years FORWARD , a Diaspora African women’s campaign and support organisation, was the lone voice campaigning against FGM in the UK. Today, the taboo has slowly started to break, the media silence on FGM has been shattered and many more new organisations and campaigners, particularly diaspora voices, have joined the march to end FGM.  But we still fail to do enough to empower affected communities. Without their support, it is unlikely much will change.

Now is an ideal time to push for a comprehensive rethink of our approach to tackling FGM in the UK. During this season of political campaigns, politicians must be open to new ideas as they look for ways to connect with ordinary people. More than one hundred thousand women and girls in the UK have either been cut or born to mothers subjected to FGM: their voices should be heard.

Background – why has it taken so long to outlaw FGM in the UK?

Female Genital Mutilation involves the removal of healthy female genitalia primarily for cultural reasons. It is internationally recognized as a form of violence against women and girls, and the Crown Prosecution Service for England and Wales has labelled it a form of child abuse.

In instances where it is practised, FGM is often an entrenched social norm. This was noted in Female Genital Mutilation/Cutting: A statistical Overview and exploration of the dynamics of change, a UNICEF report published in 2013. It says:

“Determining whether FGM/C is a social norm in a particular situation is important programmatically, because when it is, it is difficult for individual families to stop the practice on their own. There is a social obligation to conform to the practice and a widespread belief that if they do not, they are likely to pay a price that could include social exclusion, criticism, ridicule, stigma or the inability to find their daughters suitable marriage partners. Conversely, families will be encouraged not to cut their daughters if they are convinced that a sufficiently large number of other families do not practise FGM/C or are ready to abandon the practice.”

The practice of female genital mutilation has been illegal in the UK for the past 30 years. Over this period there has been limited political recognition and response to the problem, even with the amendment to the Prohibition of Female Circumcision Act 1985 in 2003 , made in response to calls from civil society organisations for the gaps in the law to be addressed. Laws demonstrate commitment of government to tackle a problem, but alone they are insufficient.

The UK has the largest number of communities affected by FGM in Europe. A recent City University study on Female Genital Mutilation in England and Wales estimates that 103,000 women aged 15-49 have been cut, while 60,000 girls aged 0-14 born before 2011 were born to mothers with FGM. This is a substantial increase since the last major statistical study published in 2007 (based on the 2001 population census information). That report estimated that 66,000 women and girls had FGM.

In recent years a number of high profile British politicians have taken up FGM as a cause. In 2011 Jane Ellison, a Conservative MP, set up an All-Parliamentary Group to campaign and raise awareness of FGM in the UK and internationally.

When Ellison was made Minister for Public Health in 2013, she initiated a programme within the Department of Health to ensure all hospitals formally record cases of FGM. In an official statement Ellison said, “We know FGM devastates lives but understanding the scale of the problem is essential to tackling it effectively. That is why, for the first time ever, hospitals are reporting information on FGM – a major milestone on the road to ending FGM in one generation here in the UK. This data will help us care for women who have had FGM, and prevent more girls from having to suffer this traumatic experience.”

Lynne Featherstone, a Liberal Democrat MP, also took up the challenge of FGM within international development as a junior government minister. She announced £35m to help eliminate FGM in one generation overseas.

In parallel to these initiatives, the past few years have witnessed growing political pressure to secure a prosecution on FGM in the UK. The Home Affairs Select Committee Report on FGM released in 2014 confirmed the government’s frustration about the lack of a prosecution. The Crown Prosecution Service blamed the police for failing to investigate cases and the police blamed statutory professionals for not reporting cases on FGM to the police. The reality is that the CPS only produced guidelines for prosecutors for investigating FGM in 2011, eight years after the law was amended and a plan of action was developed in 2012 to improve prosecution by Keir Starmer QC, the then Director of Public Prosecutions. A successful prosecution would send a message that the government is committed to enforcing the law, but it would also mean that a girl has actually been cut.

The pressure to see a prosecution on FGM also comes from human rights treaty bodies. In 2013 the Concluding Observations of the seventh periodic review of the UK government by Committee on the Elimination of Discrimination against Women (CEDAW) raised concerns on the lack of prosecutions and the continued practice of FGM in the UK.

Prevention should be at the heart of any new FGM policy

Prevention strategies take time and are less sensational than a prosecution, but are essential nonetheless. Schools form a major part of FORWARD’s prevention work; in particular, age appropriate and culturally sensitive lesson plans and proper training for teachers.

Last year we held 158 school sessions on FGM with more 4,000 students. This includes drop in sessions for girls and their parents. Working within communities is difficult but possible; in the past we have trained women with particular close-knit communities to teach others to think differently about FGM and help them understand the legal implications of cutting. Then there is the importance of training for public sector staff who come into regular contact with girls at risk of cutting. Doctors, midwives, teachers and others must be given training on how to talk about FGM and when to raise the alarm if they fear someone is at risk.

Counting is important. To better tackle FGM we need more than guestimates, we need more data on who is at risk to better target prevention programmes at those communities.

The Istanbul Convention, also known as the Council of Europe’s Convention on preventing and combating violence against women, provides a useful framework for tackling FGM which is based on prevention, protection, prosecution and integrated policies.

Our call is for a comprehensive action plan to address the complex elements that fuel and reinforce FGM. The recommendations made in the Home Office Select Committee’s report on FGM are a start. They call for awareness raising, treatment for women and girls, grassroots work in at risk communities and better reporting of cases of FGM. This is the leadership UK badly needs to help make FGM history in the UK. 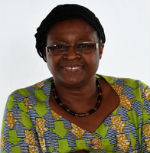