One woman struggles to prepare herself for a forced marriage in this daring and unusual poem. The invisible briefly becomes visible as her conflicting emotions are revealed.

Samiya Saif Ullah is the runner-up in the University of Warwick’s fifth annual Writing Wrongs Schools’ Competition, organised by the Centre for Human Rights in Practice. This is her highly commended poem, which she reworked with Lacuna Magazine.

and the struggle was over.

But her warped smile and tense eyes sat still.

She spoke as if the air was jagged,

the shards catching on to her voice.

Her bleeding speech was penetrating,

the struggle scorching her skin, burning her up alive.

I don’t know how many times you have to live

to see anguish that burned to keep on the inside. 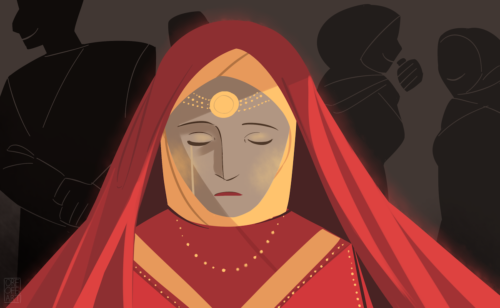 Nobody was expecting it.

Not when she held her hands to stop them shaking,

or when she choked on

the same words over and over.

words she spat out, formed the fact that

she was getting married, before the year was over.

Her mum said he’s a nice guy. A good man.

He’ll look after her.

But she couldn’t look her mother in the eye and

take her honour and rip it in two.

Because to them what is life without honour,

Her life was never hers.

She was promised to marriage,

Sweet English rose, she must be 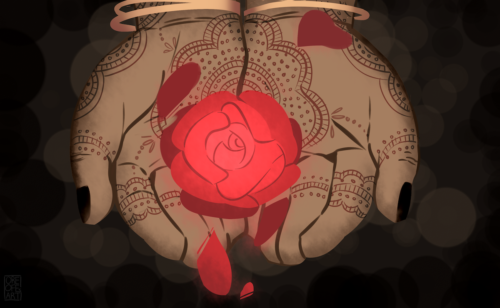 Pull out the weeds before they

with the sweet splendour

As the summer progressed,

the humid heat sank into her flesh.

These families had known each other their whole lives,

and her words broke in half

as she watched how they helped.

The bright colours could not mask

the sour taste in her mouth.

So why did they not act, as family?

To hear about the mehndi,

about the red flowers delicately drawn into her skin,

the golden glow on her cheeks,

the first step of her married life.

Nobody saw the red beneath the henna stain,

the fiery red and pulsing blood.

Nobody saw the broken glass bangles on the table.

The smell of love was peeling, flaking in the corner.

Then the panic set in, it lunged for her.

The summer was eating into her, and yet

she could not dissolve these manacles,

she could not rip away the layers of guilt and worry.

The celebrations and the people,

these people are rushing in, rolling their palms

on her cheeks. The grimace of the decor –

slowly picks at her insides.

She sews on the workings of a smile and

envelopes herself in a lengha,

and acts a stranger to celebration. Sitting

in attire much too bright for her, she

looks like the sun setting on a radiant afternoon. 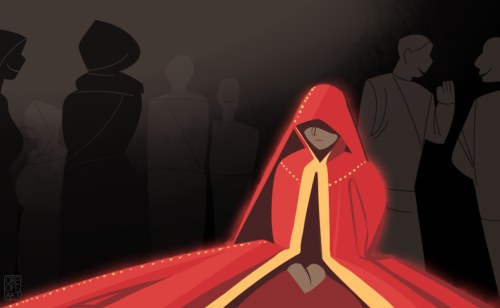 How can anyone hold the broken pieces of her world

and mould it back into strength?

The dried rose leaves have more colour in their cheeks,

but the events around her

have sculpted her into soft stone.

She is sat like she has heaven injected into her upturned lips,

a glazed resin over her gold-sewn skin.

You cannot read her, despite her story seeping out of her skin.

You cannot read her.

The Nikkah is to happen,

the exchange of each other is to happen too.

The stress is alive,

But she has cut away her tongue.

The recitation of the Quran commences,

but when the Islamic teaching says

‘a woman without a husband

must not be married

until her permission is sought‘,

these people are silent.

Their tongues coated in honour and shame.

Under harsh lights and tight smiles,

the doubt on her face slowly rises

as she picks up the pen.

As she covers her wrists,

the glaze on her skin is turning

to dust. This resin is cracking.

She let the pain pour by her,

let it spit on and splatter her soft splendour.

But she cannot peel away this commitment.

Honour has sealed her lips, the sweet poison.

As she takes the pen

even time is dense,

as pieces of realisation start to fall in her lap 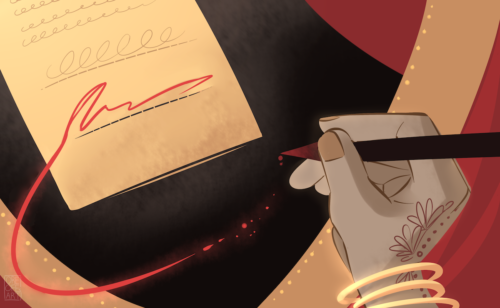 The pen trembles, but after moments the contract

She belongs to honour, and lives with violence. 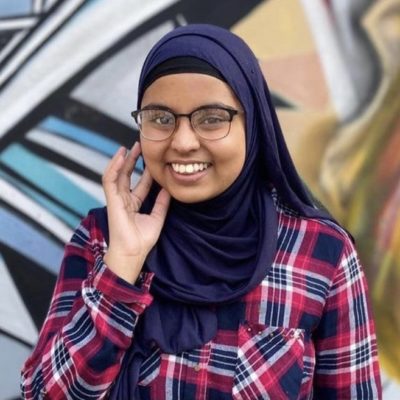