Sorcha Thomson was interning with Amnesty International Israel when she began working on the case of Palestinian journalist Mohammad al-Qiq – writing updates of his record breaking hunger strike to diplomats, politicians, and the international press in an effort to save his life. As his protest continued and his health deteriorated, she visited the hospital in northern Israel where he was being held under guard. On day 90 of his hunger strike – as hopes for his survival waned – Sorcha and photojournalist Jordan Siegel travelled independently to Hebron in the occupied West Bank to meet his family and speak to his wife about her husband’s struggle for freedom.

On 27 February Mohammad al-Qiq ended his 94 day hunger strike – a fast that put him into unprecedented medical territory. He had lost over half his body weight, and after more than three months without food, his organs collapsed and he writhed in pain as his muscles went into spasm. Balancing between life and death, his stance never changed: he would live in freedom or die under guard in HaEmek Hospital in northern Israel.

A 33 year old Palestinian journalist from the West Bank, al-Qiq is a husband and a father of two young children – aged 1 and 4. He worked as a correspondent for Saudi Arabia’s Almajd television network until he was arrested at his home near Hebron on 21 November 2015.

He was using his body to challenge the policy of administrative detention – used controversially by the Israeli authorities to detain people without charge or trial and evidence for periods of up to six months – that can be renewed indefinitely. Under international law, the practice is to be used only in exceptional circumstances and as a last resort to stop immediate danger.

Palestinians have been subjected to administrative detention since the beginning of the Israeli occupation in 1967, and before that time, under the British Mandate. One study suggests that at the end of February 2016, 627 Palestinians were held in administrative detention in Israel Prison Service (IPS) facilities including 3 women and 7 minors, one of them under the age of 16.

Speaking to Al Jazeera, al-Qiq’s wife, Fayha Shalash, also a journalist, explained that during her husband’s interrogation, he was accused of media incitement, and given two options – either he confessed, or he would spend seven years in prison. When he refused to confess to the accusation under torture, he was accused of terrorist activity with Hamas, and subsequently handed an administrative detention order. 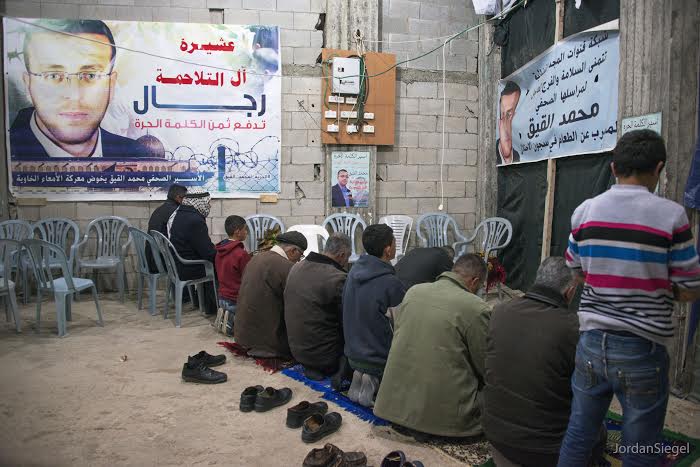 It was to challenge this order that al-Qiq began his hunger strike. He demanded the Israeli military either charge him or release him from the military detention centre where he was being held.

Hunger striking is a legitimate form of political protest long used by Palestinian prisoners. Nearly 100 Palestinian prisoners have gone on individual hunger strikes over the past five years, with varying demands. Most have done so to challenge the policy of administrative detention. The large majority of those cases ended with a court order to not renew the prisoner’s period of detention.

Hunger strikes are also used to protest torture and ill treatment by the Israeli authorities.

Almost 1000 complaints of torture have been made against the Israel Security Agency since 2001 and no criminal investigations have been launched, according to a 2015/16 Amnesty International report. Methods included beating with batons, slapping, throttling, prolonged shackling, stress positions, sleep deprivation and threats.

According to his lawyer, al-Qiq was subjected to beatings, sleep deprivation, exposure to cold, and other forms of abuse.

Over the course of 94 days, al-Qiq’s health steadily deteriorated. For months, human rights organisations called upon the authorities to release him. Protests in Israel, Palestine and across the world demanded his life be saved. Journalist syndicates from Greece, Turkey, Ireland, the United Kingdom and France called upon Israeli Prime Minister Benjamin Netanyahu to release him, adding that his death would be a “major blow for journalism all over the world”. Negotiations remained at a stalemate – al-Qiq remained absolute in his demand for justice.

In video footage taken by Jordan Siegel, his uncle explained he had met with Fatah party officials of the Palestinian Authority (PA), the interim body governing parts of the West Bank, who told him they were “totally helpless” in their communications with the Israeli authorities. However, in the past the interim government has vocally called for the release of hunger striking administrative detainees. 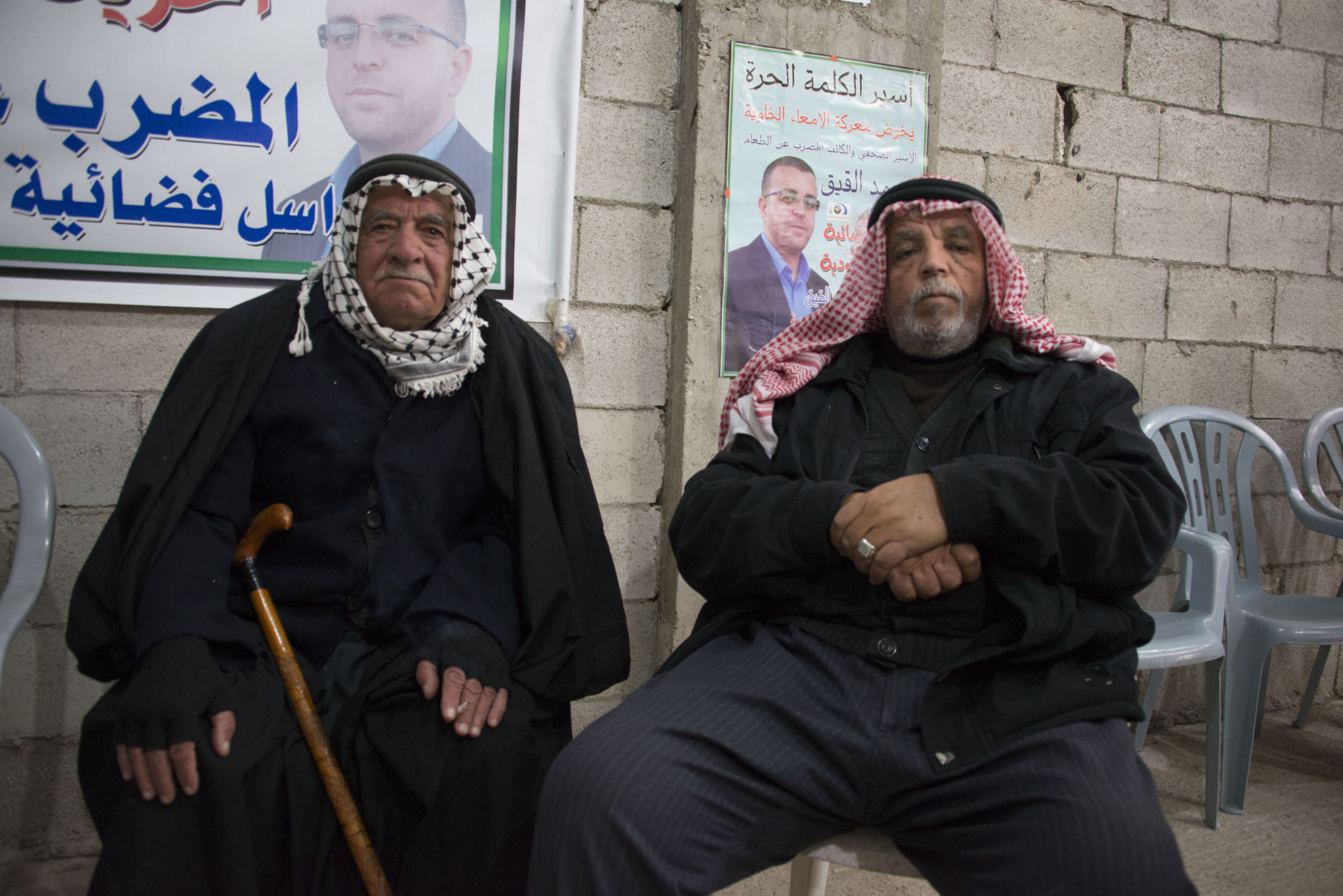 al-Qiq’s father (right) and another relative. Photo by Jordan Siegel

Prior to his arrest, al-Qiq was considered highly critical of the Fatah led PA and was often interviewed by media outlets associated with their rival organisation Hamas. He wrote articles criticising the PA security services for the arrest of political activists in the West Bank.

Al-Qiq’s uncle condemned the resounding quiet of the PA on this case, criticising them for not doing enough to challenge the status quo of the Israeli occupation. Only on day 89 of the hunger strike – as al-Qiq balanced between life and death – did Mahmoud Abbas, President of the Palestinian Authority, ask John Kerry, US Secretary of State, to urge Israel to release him.

My dad is on a hunger strike

On day 90 of the hunger strike I visited Mohammad al-Qiq’s family in their home near Hebron.

Al-Qiq’s wife, Shalash, struggled to remain optimistic. “I think they want him to die”, she said, as she held her 1 year old daughter in her arms. “If they want him to be alive, if they want him to go back to his home to his wife and children they will make any kind of deal that will make him free sooner. But they are refusing everything… It is hard. I am trying to hide the pain that I have been through in the past three months.”

She explained the moment her husband was taken from the house. “My family life was normal – cooking, sitting in my living room, playing with my kids, me and my husband. The children always took baths with him, and he changed their diapers. But one day, the Israeli army broke our door, at 3am. And they kidnapped my husband without any charges – he didn’t do anything wrong. And so my whole life changed.”

“I am smiling now for my children. I can’t always be sad or crying because they will know that there is something wrong. I don’t want them to be sad. They are too little to know such suffering.”

The children played and giggled – seemingly oblivious – in the living room, beneath a poster on the wall demanding their father’s release. Shalash continued, “My oldest son is almost four years old. He is always asking for him. He knows that the soldiers arrested his father but he doesn’t know that he is suffering now. He doesn’t know anything about hunger strikes. He tells people “my dad is on a hunger strike” but he pronounces it wrong.” 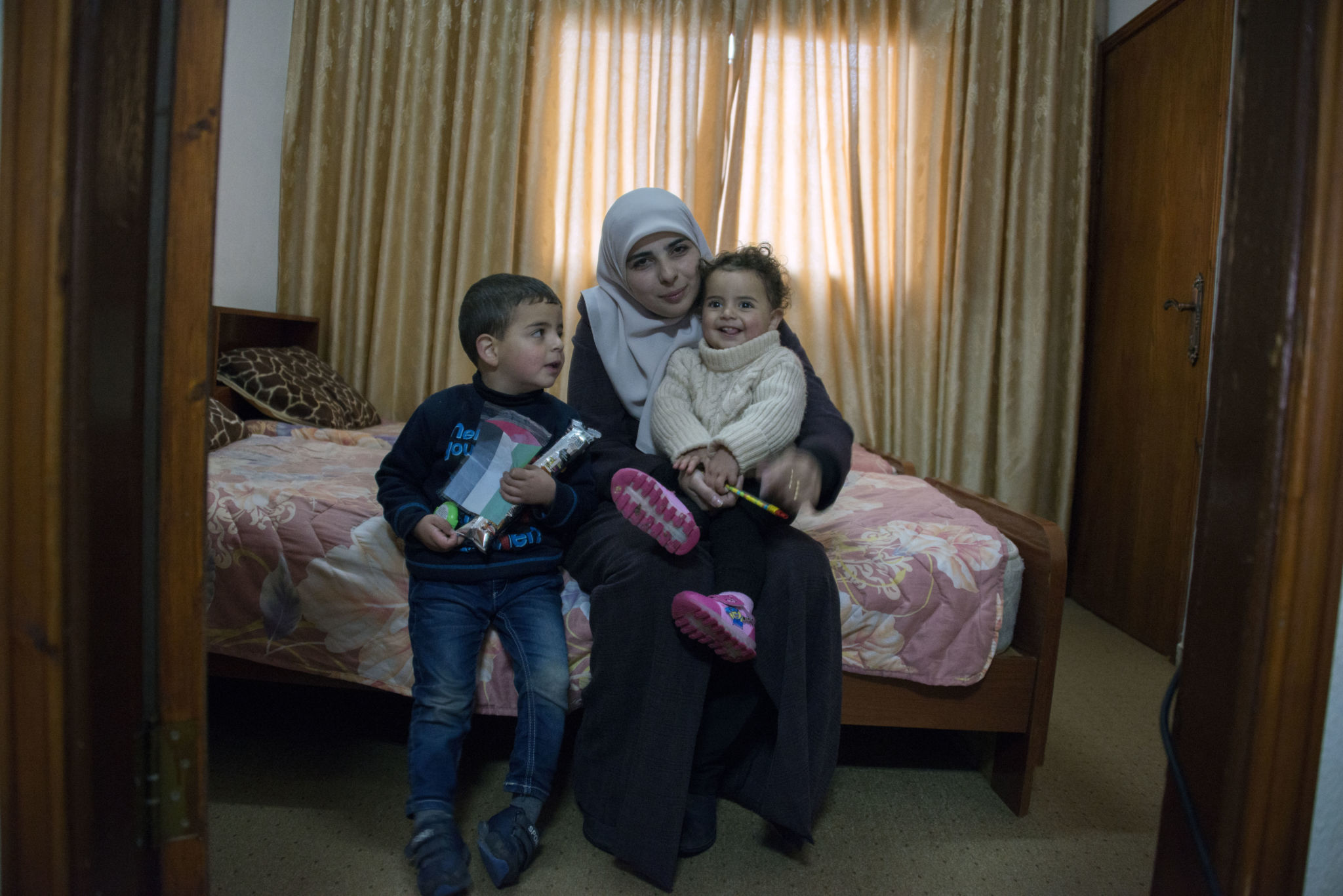 She remained unwavering in her support for her husband in his protest. “I am a journalist too. I refuse to accept that a Palestinian journalist can be held without charges on hunger strike for three months and the Israeli side will continue to refuse anything to make him free. I will stand with him always. The message is either we will live free or we will die by our dignity.”

“He is not doing this for a personal case. This is about all free people. Everyone that cares about humanity in this world should care about this case. I think Mohammad will be a perfect hero for all those who love freedom.”

I left the family home with the sense that despite the courage of her words, with every second that passed, hope for the release and survival of Mohammad al-Qiq – husband and father – was rapidly waning.

However on day 94 it was announced that al-Qiq had ended his protest as part of a compromise deal with Israel to free him from detention. Under the terms of the deal, announced by the Palestinian Prisoners Club, al-Qiq was to be released on 21 May and his detention would not be renewed. He would remain in the hospital in Israel for life-saving treatment, in a contravention of his previous demand to be treated in a hospital under Palestinian jurisdiction. His family were now permitted to visit him, in a reversal of previous orders.

Celebrating his freedom, al-Qiq thanked people around the world for supporting him. And he insisted that the first food he would take would be given to him from the hand of his wife.

Muhammad Barakeh, chair of the Higher Arab Monitoring Committee, a body that represents Palestinians in Israel, described the outcome as a “victory over the jailers and the occupation”.

“We said from the start that we wanted to see Muhammad al-Qiq free, alive, a hero with dignity, and that is what we welcome today,” Barakeh said at a press conference near the hospital. 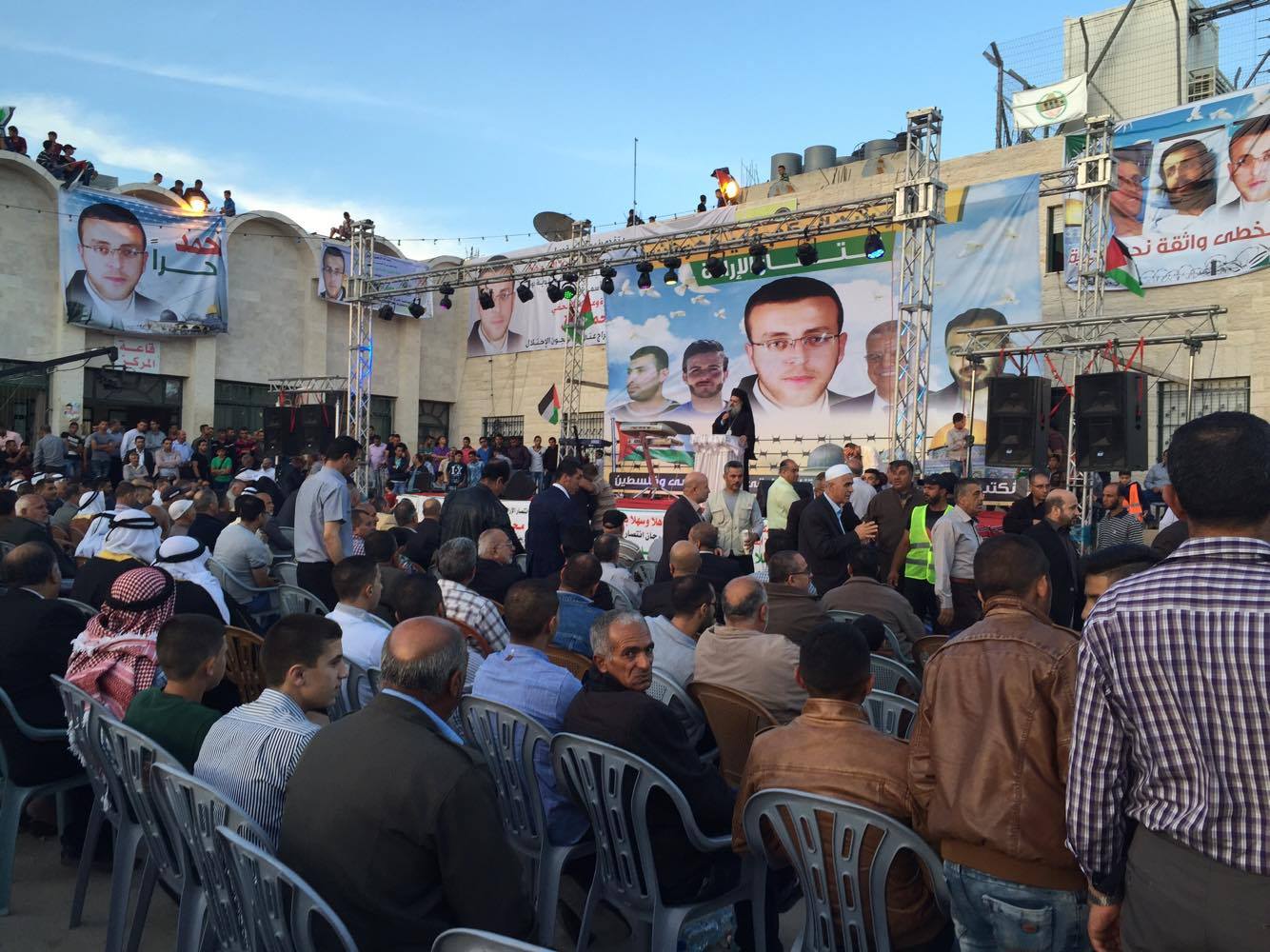 On 19 May 2016 – six months after his initial arrest – al-Qiq was released from hospital in Israel and permitted to return to his family. He was welcomed home to celebrations of his victorious protest.

Doctors have stated that he suffered medical damage that will be impossible to fully recover from and that will affect him for the rest of his life. Why did it take 94 days and a man on the verge of death for a compromised agreement to be reached?

With the irreparable damage done to al-Qiq on his record breaking hunger strike, the authorities delivered the message that a hunger strike may result in the cancellation of administrative orders, but the price upon your body will be huge. And the conditions of release will be agreed on the terms and the schedule of the authorities.

And over the course of the occupation – one year from its 50th anniversary – Israeli forces have arrested more than 800,000 Palestinians – almost 20% of the total population in the occupied Palestinians territories. With the majority being men, about 40% of male Palestinians have been arrested. This number fluctuates but has risen steadily since the outbreak of the Second Intifada in September 2000.

With current statistics showing record numbers of Palestinians being held in Israel, Laith Abu Zeyad, of rights groups Addameer, has commented “Since the beginning of the current uprising in October 2015, Israeli forces have ramped up arrests, including mass arrest campaigns. Administrative detention has been used in a widespread and systematic manner, especially when the Israeli authorities lack evidence against the detainee.”

Administrative detention remains a punitive measure and a political action that reflects Israel’s official policy against the Palestinian people living under occupation: one of collective punishment and military control. Mohammad al-Qiq – in his record breaking protest – highlighted the lengths that the authorities can go to deny one man’s freedom.

Jordan Siegel is an American photographer and video-journalist. She is currently based in Israel, working to document the lives of Palestinians in the occupied West Bank, and of African asylum seekers living in Israel. 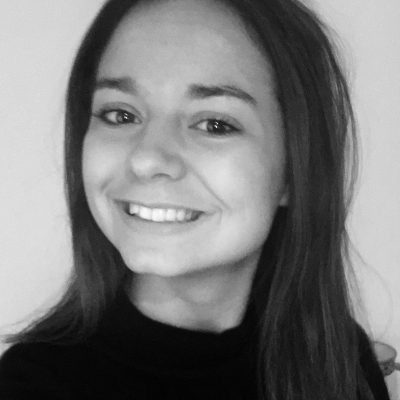