Alan Lyddiard’s French adaption of George Orwell’s novel Nineteen Eighty-Four is close to the end of its fifth consecutive season at the Théâtre de Menilmontant. Since 2008, when its run began, it has attracted an audience of over 15,000 people to this small theatre tucked away in Eastern Paris. 1984, Big Brother vous regarde, and Orwell’s nightmarish vision of the future, continues to draw in theatre-goers.

Perhaps the reason for this enduring popularity is Lyddiard’s presentation of Orwell’s dystopic Oceania as bearing a striking resemblance to the world today. Only last month President Obama called for reforms of the National Security Agency’s internet surveillance programmes and interception of both US and European metadata. And what are smartphones and iPads if not our version of telescreens?  Lyddiard leaves us in no doubt that this is a contemporary story: using video, overbearing sound and harsh lighting, he inflicts the story on his audience.

Sébastien Jeannerot and Florence Nilsson, who are also the producers of the show, play the principal characters, Winston Smith and Julia. In comparison with Orwell’s original work, Jeannerot’s Winston Smith was played as a much more anxious character, one who is altogether more easily broken in Room 101. The portrayal of this Snowden type, spectacles and all, provides contemporary audiences with a disconcerting reminder that our privacy has been compromised by intrusive government surveillance programmes such as the USA’s PRISM. Nilsson’s spirited portrayal of Julia, seemingly a fanatical supporter of Ingsoc, complements Jeannerot’s Winston Smith who oscillates between hope and the terror of being found guilty of ‘thoughtcrime’. Julia is played as a sensuous and vibrant young woman, which makes the final scene in the play, when she meets Winston after they have both been reintegrated into Big Brother’s society and restored to orthodox thought, even more harrowing. Furthermore, in Orwell’s book one sees Syme as being of the same mind as, and a friend to, Winston. However, his portrayal by Loic Fieffe was frankly that of a depraved character.  In Lyddiard’s stage adaption Syme is abrasive and, at one point, forces himself upon Julia, which makes for unsettling viewing and places Syme as a foil to his co-worker Winston’s caring attitude towards Julia. Neil Murray’s set design is minimal, yet permits the representation of characters’ thoughts and the Party’s propaganda. The realigning stacks of television screens project both Winston’s childhood memories and political images (including newsreels) and the stern face of Big Brother. This alternating depiction of life in Oceania arguably questions the link between the intimate and the political, considering the notion of boundaries of privacy in the context of a developing romance, within an otherwise absolutist society. This uncomfortable tension between a private love and totalitarianism similarly challenges our own view: asking the audience to consider whether it is so different from our own so-called democratic state. Not only does the set design and the use of multimedia enforce the uncomfortable and excessive individual surveillance of Orwell’s Nineteen Eighty-Four, the harsh white lighting and excruciatingly loud music and broadcasts by the Party create a heightened sense of discomfort. At times it becomes almost unbearable and more of a distraction than affirmation of the tale.

Ultimately, Lyddiard’s adaption challenges us at the basest level. Watching brutal scenes based in this totalitarian state is unsettling yet captivating, perhaps epitomised by the stomach-turning, torture scenes in the Ministry of Love. The direct interaction between audience and cast member in the production, combined with the heavy use of the cinematic result in a great adaption of an Orwellian masterpiece that provokes thought and questions a world where thought is punished and perpetual war is the norm, something that resonates a little too well for comfort in our modern society.

A new production of 1984 is also currently playing at the Almeida Theatre, Islington. For more details contact 020 7359 4404 or see www.almeida.co.uk 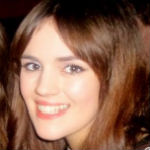