The Orange Trees of Baghdad was born out of rage. How does a book begin? Sometimes with an idea, a thought, a concept, a scene, for me it was an emotion and a phone call. Like everyone in the Western world in 2003, I watched the build-up to the war in our media and our parliaments, and like many millions around the world, I’d believed the war was unnecessary and unjust and would do more harm than good to the Iraqi people.

My family in Baghdad had not been privy to all this information about why a war should be waged against them, nor how much weaponry was to be directed at their country. They got their information from the state media in a dictatorship, and they didn’t believe a word of it. But they had already lived through the Iran–Iraq war, the Gulf War and a decade of sanctions, so they knew how to prepare for war and that is what they were doing. And they knew the true horrors of war, too, unlike all us pontificating Westerners.

As it became obvious that war was inevitable, I spoke to my three aunts in London, two of whom had been stranded there when the Gulf War started in 1990. Their first holiday from Baghdad after the lifting of a decade of travel restrictions after the Iran–Iraq war had become a permanent vacation without end. But our family home in Baghdad, where my father and his sisters had grown up, remained intact with all their belongings still in closets, furniture left as it was, the family photograph albums left behind. My great-aunt Lina had returned despite the threat of the Gulf War and lived through the embargo that impoverished a once prosperous nation. She was guarding our house, living there alone, and she planned to stay through the war and its aftermath to protect it from looting.

I wanted there to be a picture of before and after, so people would always know what was there before we went about destroying it.

My aunts told me how my elderly relative was stockpiling food, thinking about digging a well in the back garden, and looking at her orange trees, now dead and diseased, and wondering if they would make good firewood in the event of electricity cuts. I started taking notes. The contrast for me between the debate that was happening on “our side” and the practical preparations middle-class Iraqis were making made my heart stop. I began writing articles about the ordinary Iraqis that I knew, hoping that somehow the word would get out that bombing millions of helpless trapped civilians would not bring about democracy and prosperity in the Middle East. I was surprised by how many otherwise compassionate and intelligent people in my midst were sincerely ready to unleash an unprovoked invasion in order to get rid of a dictator. I started to feel angry, at the media, politicians, friends, family, at the way we discuss these massive events as if we had some kind of moral high ground from which to arrange the world’s affairs.

All I could do, as helpless as everyone else despite how powerful we felt we were, was to record what was happening as I saw it. I wanted there to be a record of what the Iraqis experienced, I wanted there to be a picture of before and after, so people would always know what was there before we went about destroying it. I wanted to remind people that when we unleash our wars on others, we create an image of our culture, not as a reasonable democracy, but as a violent, senseless, greedy society that is ready to kill as many innocent people as it takes to get what it needs. And because it is democracy and not a dictatorship, we as individual voters do bear responsibility when war is made in our name. There was and is nothing creative about war and we don’t make war more nicely than our enemies do. We were inundated with comparisons with stopping Hitler as an excuse for war, despite the fact that we were the unprovoked invaders this time, we were the ones occupying another country.  I wanted there to be a record of what it felt like to be on the receiving end of our military machine. So I literally took notes every time I spoke to any of my relatives. I didn’t know I was writing a book at that point. I just knew that an incredible story was unfolding that I had a personal connection to, and I didn’t want any of it to be lost.

Death Shower on the Playground by Wasfi Akab

I managed to publish a few articles, the first one coming out to coincide with Shock and Awe, that most disgusting concept, on 20 March 2003. I still didn’t know I was writing a book, as I didn’t think I had the authority to do so. I was outside of Iraq, I couldn’t go to see firsthand what was happening, but the Baghdad my father had dreamed of seeing again in some future peaceful time was being obliterated live on television. We took a trip to London together, and on the flight, I started seriously questioning him about his Iraq for the first time. I’d always wanted to visit his homeland but I never could because of the “situation.” I’d been to Turkey, Syria, Jordan, Lebanon and Egypt, but never set foot in Iraq. Now I needed to know everything about our family, my father’s relationship to Iraq, and what he felt about the current war.

The other challenge to the idea of writing a book was that I was writing in real time, taking notes as things happened, and I didn’t know what was going to happen next either in the grand scheme of international politics or to my family. It felt impossible to construct a narrative when I didn’t know the ending. But I soon realized that there was not going to be a quick or easy outcome to this war and my family’s circumstances. I found that Westerners were always hopefully adding that “things are getting better now, though,” when we talked about Iraq, as if they couldn’t live with the lack of resolution or the idea that things weren’t getting better but actually getting much much worse. I knew that this lack of easy answers had to be built into the way the book was constructed, to express the true anarchy of war and its effects. We can look back at history with a sense of a beginning, middle and an end, but as it is happening we can’t see how our actions are going to affect others or how they will respond.

I knew that every Iraqi family had a hair-raising story to tell about life under Saddam Hussein, the various wars, the sanctions, and now this new catastrophe. Our story was not out of the ordinary, or even especially harrowing, but the fact that such a normal middle-class family could experience such extraordinary events and survive felt universal and close. A turn of fate and I could have lived all the harsh history of Iraq instead of the safe protected life I had lived in the UK and Canada. I wanted to understand everything that had led up to such a moment. The result is The Orange Trees of Baghdad. 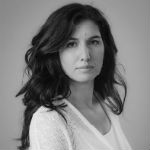