On the second anniversary of the Grenfell Tower fire, survivors and the bereaved share their stories

The Guardian’s daily podcast Today in Focus marks the second anniversary of the fire with a moving and, at times, exasperating account from survivors and relatives of those who died. They remember the night and talk about their tireless work over the last two years, in the face of government inaction and a local council that was accused of being “missing in action” in the aftermath.

The night of the fire we were abandoned – we were absolutely abandoned – by the state and by the local authority. And those people who were meant to come and help us just left us. They left us basically standing in the street. The police were kind of telling us to “go away” – but not in such polite terms. Shouting at us to “fuck off”.

Anushka Asthana also speaks with fellow Guardian reporter Robert Booth who has been covering the story since the blaze, reminding us that 72 people were killed, including one unborn child and 18 children in all. Find Robert’s feature here.

The immediate rallying of the community to bring aid to survivors (labelled, admiringly, as “anarchy in action” by Benjamin Zephaniah), the monthly silent protest marches which continue to this day, and the lobbying by those campaigning for justice is simultaneously damning evidence of the inaction of government and local authorities, and testament to people power.

It’s a call to the nation to not let Grenfell be forgotten. Listen below.

The podcast comes as we publish a call for prosecutors to consider bringing a murder charge in response to the fire. Professor of law Alan Norrie explores the meaning of “social murder” and argues criminal law could be used to hold those responsible to account. Find his story here. 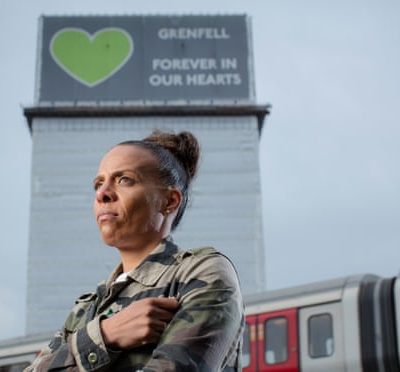