Dr Emily Grossman met a series of hurdles in her quest to be a scientist, from male-dominated classrooms to brutal social media trolling. Now she is using the challenges she faced to urge more young women into STEM – and to encourage scientists to cry in the lab.

When she was five years old, Dr Emily Grossman’s dad became her first science role model. Igniting her imagination, he used simple storytelling to introduce her to the complex concepts of evolution, genetic inheritance and Einstein’s theory of relativity.

These stories sparked a love of science that would take her to Cambridge University, earn her a PhD and eventually see her launch a TV career speaking out for women in science, technology, engineering and mathematics (STEM). But along the way she was faced with being outnumbered in the classroom, finding herself in learning and working environments that didn’t suit her, suffering with “imposter syndrome” and taking on controversial right-wing pundits in live broadcasts.

She remembers: “Because my dad was sensitive and kind and caring it never occurred to be that to be a scientist you had to be any other way. And I was perhaps privileged in going to a girls’ school because I was never faced with this stereotype that it was anything out of the ordinary for a girl to want to be a physicist. My two A-level physics teachers were women and I had a brilliant female maths teacher. So I was really excited to get a place at Cambridge University to study natural sciences with the aim of becoming a physicist.”

After starting at Cambridge, it didn’t take Grossman long to notice that she was one of the only girls on the physics course.

“My first thought was ‘Wahey! I get to hang out with the boys!’” she says, “but that didn’t last very long. “Quite soon I started to lose my confidence. I was learning in small tutorial groups where everybody else seemed really confident. It was quite a competitive and macho ‘sink-or-swim’ environment.” She adds: “This isn’t always a gendered thing, and a lot of girls learn very well in combative environments where you’re vying for attention – just as a lot of boys don’t learn best in that environment – but, suffice to say, I certainly don’t. I felt completely out of my depth and I was scared to answer questions in case I got them wrong. I didn’t have much support or anyone to talk to so I assumed it was something that was wrong with me.”

After only a couple of months, she decided to drop physics, finishing the first year before switching to biology. She says:

What changed in that learning environment, was my perception of my abilities, not my actual abilities. In the end-of-year exams I actually did better than a lot of the boys.”

After graduating, Grossman moved to Manchester to do a PhD in cancer research. She recalls: “I was really excited about it but, again, within a few months I started to lose my confidence. I found myself in a research environment that didn’t suit me, with a lot of solo working and people doing their own thing. I cried in the lab when I didn’t understand things or when my experiments didn’t work because I cared about the results. It made me feel I didn’t fit in and I wasn’t good enough to be a scientist.”

Nevertheless, she persisted. But after gaining her PhD, Dr Grossman left science behind to go to drama school, training as an actor. For the next eight years she led a double-life: actor by night, science teacher by day. She says: “I had a fantastic time but the acting work was scarce and there were a lot of rejections and knock-backs. Eventually, I decided I wanted something more fulfilling and more consistent. But it was a really difficult time because I had worked so hard and I had burnt out. I didn’t know what I was going to do.

Read more: My life on the humanitarian frontline

“I did a lot of soul-searching and I got a lot of support (from friends, counsellors, therapists, etc.) and eventually I saw an opportunity called BBC Expert Women. Whenever you hear someone on the telly or radio talking about science, technology, engineering or manufacturing, it’s usually a man. So to redress the balance the BBC were looking for women who had experience in STEM and were interested in doing some media training.”

After several rounds of the selection process, Dr Grossman was invited to a training day. She says: “They had sent us a booklet showing all the women taking part. The night before I flicked through it and remember thinking ‘These women are amazing. I can’t possibly go.’

“The next morning, after hardly any sleep, I arrived at the BBC and 30 of us sat down before the woman running the course came out and said: ‘Right. First of all, I know that every single one of you thinks that she is the one who shouldn’t be here. We all looked at each other and started laughing because everyone there was clearly thinking the same thing.”

The BBC divulged that whenever they wanted a woman spokesperson in STEM they had to phone six women before one would say “yes”. The five others, they said, would claim to not be expert enough, suggesting their boss or one of their colleagues instead.

Despite the initial bout of imposter syndrome, Dr Grossman got an injection of confidence from the training and decided to try to make a career for herself as a science communicator. She attended science conferences and events, and contacted TV production companies, radio stations and newspapers offering her skills as a spokesperson. 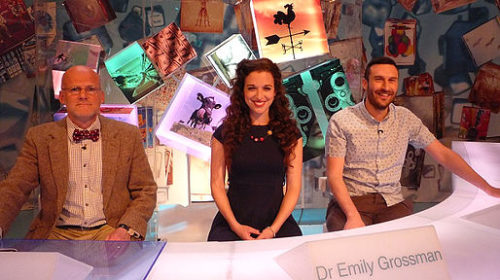 She soon took up residency on Sky TV panel show Duck Quacks Don’t Echo, hosted by comedian Lee Mack, where she worked as an on-screen science expert for six series. Now, she tours schools, colleges and universities as a speaker, writes books and articles about science, and responds to media requests relating to maths and science stories. She says: “I’m finally doing something I care about, something that’s meaningful to me. It feels so well aligned with what I’m passionate about and what I have to offer.

But until recently, I still had in the back of my mind these stereotypes and this feeling that I’m still not suited to being a scientist because I’m too emotional and too sensitive to my environment, even though these are the qualities that made me interested in science in the first place.”

This internal conflict came to a head a few years ago when Dr Grossman was asked to go on Sky News to respond to a comment made by Nobel Prize-winning scientist Tim Hunt, who, at the World Conference of Science Journalists, said the “trouble with girls in the lab” was that “you fall in love with them, they fall in love with you and when you criticise them, they cry”.

Just before going on air Dr Grossman was told it would be a debate, pitting her against anti-feminist, Milo Yiannopolous. (Yiannopolous worked with Steve Bannon as an editor of far-right website Breitbart before resigning after making questionable comments regarding paedophilia. He was later banned from Twitter after the platform cracked down on a wave of racist abuse targeting Ghostbusters actor Leslie Jones. And Paypal then suspended his account over Nazi-based trolling of a Jewish journalist.) Dr Grossman says: “In the interview I stuck to my point. I said that I cry and that there’s room for scientists to cry.

“The two weeks following that debate was one of the most awful and challenging times of my life. It was two weeks’ worth of constant trolling on social media.

“I needed to take time out to process what had happened and to recover from that. But what really stayed with me was not the awful misogynistic comments or the personal attacks on me – or the smattering of anti-Semitism. What stayed with me were the comments that there is no room for emotion in STEM. I felt they were the most damaging because this is what puts so many people off a career in this field.

“I’ve come through that knowing that not only am I still valid as a scientist and as a logical thinker even though I’m sensitive and emotional, but that in fact, those qualities actually add to what I can offer as a scientist and as a communicator.” Six months later Dr Grossman delivered a TEDx talk, ‘Why science needs people who cry’.

She says: “As women, we’ve been socialised to show emotions more but simultaneously criticised and put in our place for being emotional. Meanwhile, men are damaged by the fact that society doesn’t let them show their emotions. Nobody wins.

“There’s a saying that bullets are unshed tears. When we don’t allow ourselves to be emotional human beings, it creates anxiety, stress and depression. It creates repressed anger and aggression.”

She adds: “I’ve learnt that no matter who you are, or what background you come from, if you are passionate about understanding the world then STEM careers are for you. And I don’t mean even if you cry, but especially if you cry.”

Dr Grossman can be found at www.emilygrossman.co.uk and on Twitter @DrEmilyGrossman 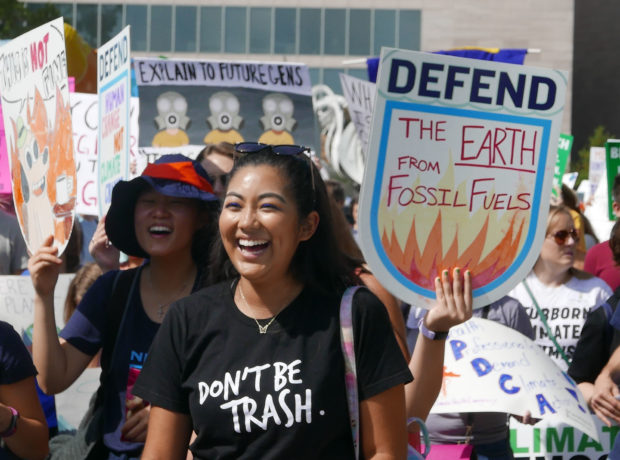