Crossing the Mediterranean Sea by Boat is a vital report inspired by the personal stories of hundreds of migrants and refugees. A team of interviewers travelled to key European sites to find out whether new migration policies designed to save lives are effective or ethical. Dr Dallal Stevens shares the team’s findings from speaking with hundreds of people on the move.

What did your interviews uncover?

“Many seem to think that people coming from Africa are largely economic migrants, but one of the most important things we discovered was that this label is far too misleading, far too simplistic. People’s motivations, their choices and their decisions to move are affected by so many different factors. We’ve described these as ‘intersecting drivers of migration’. Yes, some of these are economic but even then, if you ask what has produced the poverty pushing people to uproot themselves and make hazardous journeys, there are often many underlying causes for this. And even if someone is motivated to move for economic reasons, other factors arise during the journey. Things have become so complicated by the time they’ve got to Europe that those original reasons may no longer tell the full story.”

What sort of stories did you hear?

“We spoke to people who had travelled to Libya originally. They were never intending to come to Europe but when they found themselves in Libya seeking work and the country descended into civil war   they were trapped, literally with their backs to the sea. There was extreme violence, detentions, incarceration, rape – all these things. So, although, you may start out on your migration journey for one reason, events occur and you then find yourself in a position of seeking protection. We interviewed quite a few people coming from Libya who said: ‘I had no intention of coming to Europe but in the end I had to escape Libya’. And of course smugglers become enmeshed in this.

Whereas the European agenda has been focused on ‘evil smugglers’, for people who are trapped and desperate (some fleeing war) there is often no alternative.

“They can’t go back south through Libya, for example, even if they wanted to. And a lot of the onward journey is about saving face. In many cases a family gives up everything it has to send the youngest son on this journey – so those migrating feel they can’t easily turn back. They have to keep going and even pretend their journey has been a success, never telling the real story of how terrible it’s actually been. 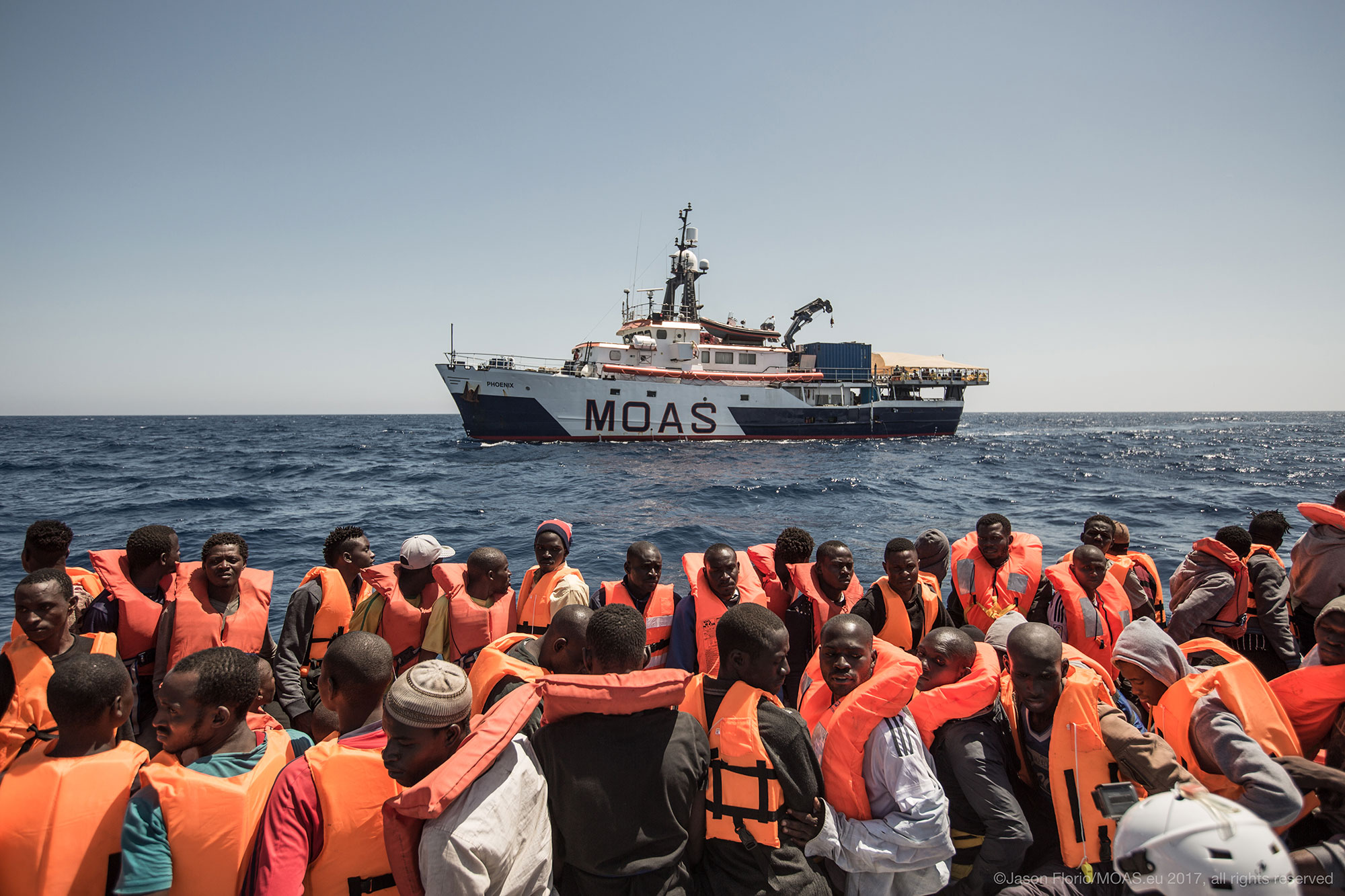 Refugees are pictured in front of the rescue vessel of Malta-based Migrant Offshore Aid Station (MOAS) during a Mediterranean mission.

“We also found these intersecting drivers in the eastern Mediterranean journeys, where there were a lot of Afghans coming through in secondary or tertiary migration. Quite a number of Afghans were coming from Iran, where they had gone in the 1990s when Iran had welcomed them. Now Iran has changed its policy and has been telling Afghans they must return to Afghanistan. There have been reports of ill treatment and reduced rights so they can’t work, and they’ve been forced to move on. Some Afghans were actually Christians who might initially have been refugees to Afghanistan. They thought they were ok in Iran but increasing discrimination has forced many to move again and they’re fearful of returning to Afghanistan. How do we label such people? Are they migrants, asylum seekers or refugees? It depends on how far back in their personal stories you look.

“We saw Bangladeshis and Pakistanis who said the reason for their journey was largely work-related. Many had been in the UAE, where they had suffered very poor conditions, and then lost their jobs. Not knowing what to do, they thought: ‘We’ve got to try something and somewhere else’.

“So those intersecting drivers are a way to show that this linear idea we have of migration is flawed. There are multiple reasons for moving and those reasons are changing from one day to the next.

Many people had no intention to move in the first place, some of them had no idea where they were going and many had no intention of coming to Europe. That’s in stark contrast to the rhetoric we see in the media.”

Where were you interviewing and how did the stories develop?

“The team interviewed in Kos, Malta and Sicily in the first phase in 2015, and then in Istanbul, Athens, Rome and Berlin in the second in 2016. The majority of people I saw coming through to Kos across the eastern Mediterranean were Syrians and I went on to see more Syrians (at the end of the journey for many of them) in Berlin a year. Many had been travelling for nine or ten months. By the time we conducted the second phase of interviews, various new policies had been introduced, such as the EU Turkey arrangement to stop people reaching Greece from Turkey. So, at this time, the interviews were not just about crossing the Mediterranean but about people becoming trapped after arriving in Rome, Athens, Istanbul, and various other places.

In Greece the people we met had the hope of a new life in Europe but by the time many had reached Berlin, the hope seemed dashed.” 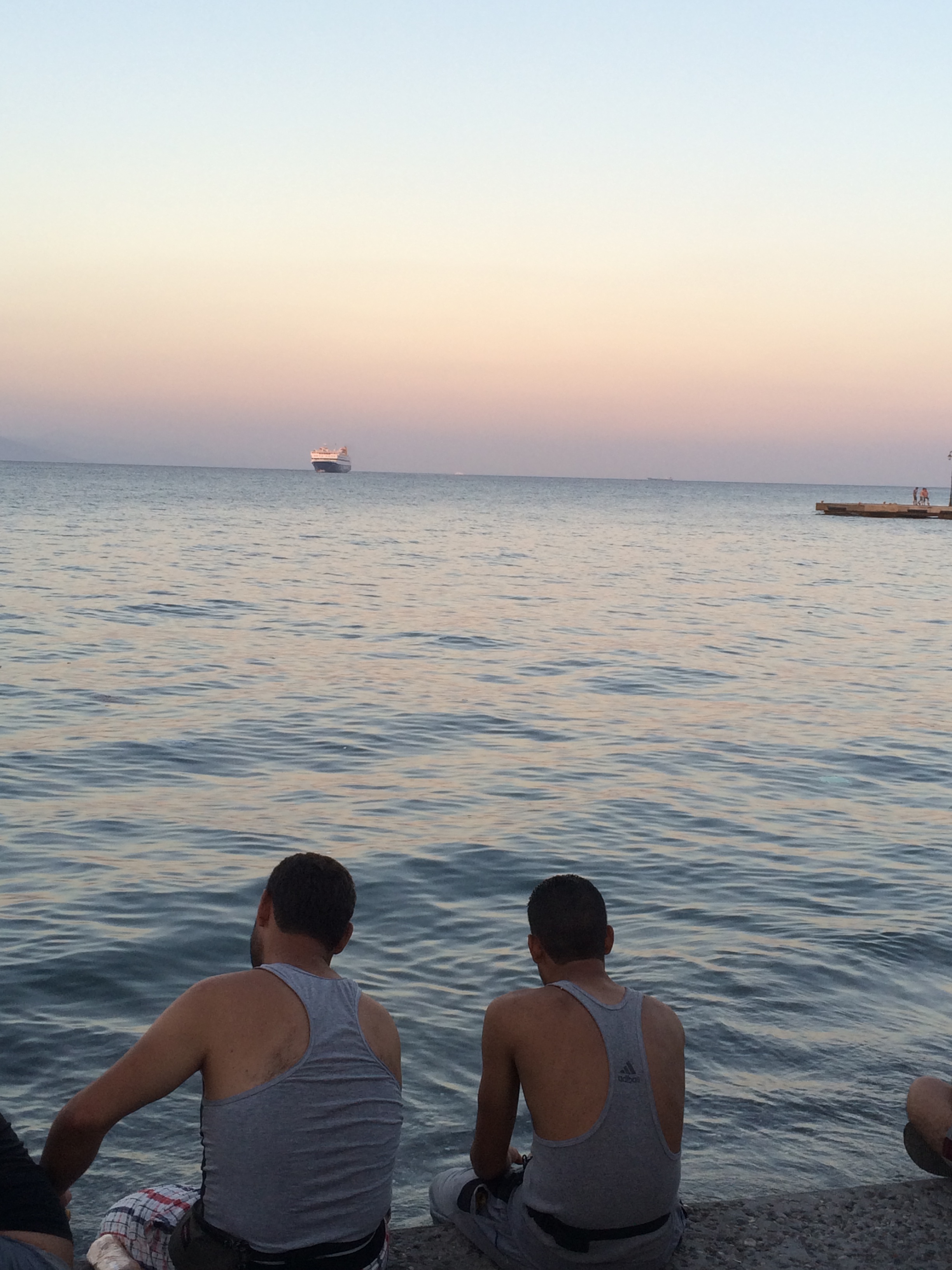 Refugees wait to leave the Greek island of Kos – by Dallal Stevens.

Which stories surprised you most?

“I think people would be surprised by the enormity of the desperation and the sacrifices that people are prepared to engage in.

There are heavily pregnant women embarking on incredibly difficult and dangerous journeys with the knowledge that people have died ahead of them, but still going ahead with it.

“That gives you some sense of what they have been through. Sadly, for those of us who are migration scholars, the narratives, although heart-breaking, aren’t necessarily shocking.

“One of the questions I was asking was: ‘What does asylum mean to you?’ For me, that produced interesting responses because asylum has become such a complex issue, but the answers were incredibly simple and straightforward. People said: ‘Asylum means safety. It means security. It means I’m able to provide education for my children. It means I can get a job – I don’t want to sponge off the state, I want to give something back. It means shelter and an ability to bring family members.’ We can really overcomplicate it but there is a purity to those answers.”

What conditions did you see people living in and what was the dynamic between new arrivals and refugees and migrants who made the journey earlier?

“We were interviewing in a large venue in Berlin which had been set up as temporary sleeping areas. There were 12 people sleeping in each small section with no walls, just partitions. When people were sent there, they were told they’d be there for only seven days at most. We were interviewing nine months later for some of them and they were still living in these really poor conditions. There were suicide attempts. Most people hated the food. There were also Arab guards who had long lived in Germany and were reportedly treating the new arrivals very badly saying things like: ‘Why are you here? You are making things worse for us. You should go back.’ So they were repeating the familiar mantra: ‘We’re ok here. Stop coming.’ 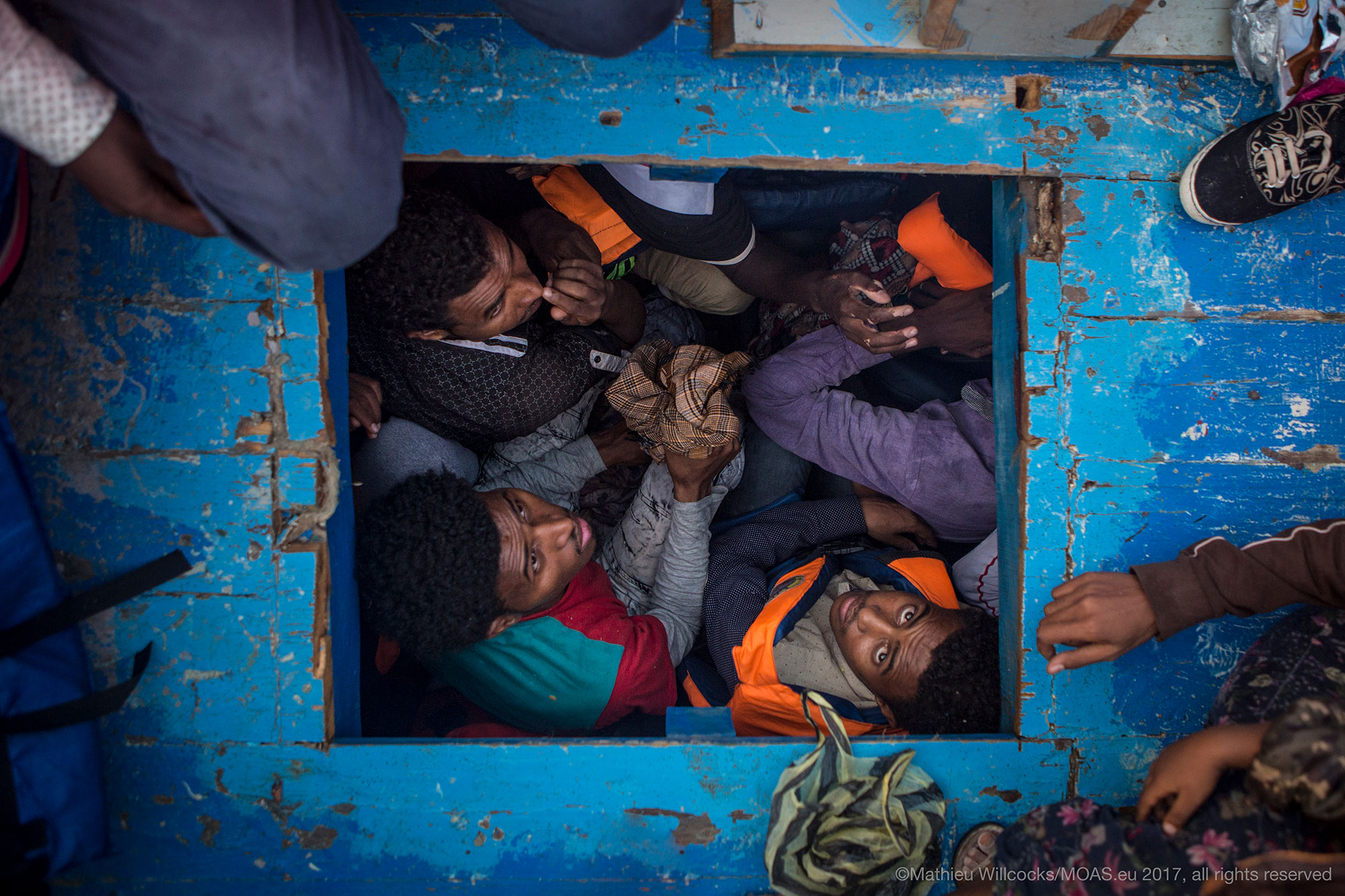 People attempting to cross the Mediterranean are pictured cramped inside a boat.

“I was particularly struck by the account of one young Arab man who was recently married but had to flee the war leaving his wife in Syria. He just wanted to be with his wife but by 2016, when we were in Berlin, Germany had changed the law from offering refugee status to offering subsidiary protection. This meant people now had to wait at least two years for family reunification rather than being reunited immediately with family members. So now he’s forced to wait and wait. I have since heard that many cannot bear the separation so are undertaking the reverse journey back through Europe to Turkey, often with the help again of smugglers.”

Your report mentions the impact of technology and social media. How did you see them in action?

“It was the first migration movement where technology had a noticeable impact. People were using the GPS on their phones to navigate their way through Europe. We had a striking moment sitting in our first or second interview when a young Iraqi man was looking at his phone and suddenly said: ‘I’ve got to get to the Hungarian border. In two weeks they’re going to close the border.’ We didn’t know this ourselves at the time. There was limited official information so the people we were interviewing were relying on Facebook groups and WhatsApp to tell them which route to take and what lay ahead.

“Often people weren’t provided with proper information and the dissemination of inaccurate information can lead to great anxiety and distress, and more severe consequences.

Social media is also used by smugglers for advertising. We saw one advert for a smuggler featuring an image of a great big ship which, obviously, is not what people are actually going to be travelling on.

“Being able to sift between what is true and what’s not true is difficult for desperate people on the move.”

What changes are you calling for?

“We have suggested a range of responses, some short-term (including emergency rescue), others medium and longer-term. It’s a multi-pronged approach, addressing issues at the source, such as increased support for countries of origin to help improve their economies and remove the need for people to undertake dangerous journeys in the first place. There are no quick answers but without a proper understanding of the reasons for migration, policy makers are never going to develop a European agenda that’s successful. We also have to work on public understanding.

People and governments need to understand the effect that climate change is likely to have on migration in the future.

“For example, if large parts of Bangladesh are flooded, millions of people will have to migrate and be taken in by other countries. Europe cannot expect low and middle income countries in the region to assume all the responsibility.”

How has this experience changed your perceptions?

“I can still see all the people we spoke to and hear the awfulness of so many of their stories. Until you sit down with someone and talk about his or her experience you can’t imagine it really. That’s why I would say to all policy-makers that they must go and talk to these people. Until they do, they’ll never fully understand the issues at stake, and they won’t know then how to deal with them effectively.”

A gallery of images following teenager Malick Jeng from his Mediterranean rescue to an asylum centre in Italy.

Alone after the shipwreck: The story of Amadou, a refugee who survived crossing the Mediterranean and landed in Sicily.

Brexit and the victimisation of migrants in Europe