In Italy forensic pathologist Cristina Cattaneo is working to identify some of the 20,000 refugees who have died or gone missing while trying to cross the Mediterranean. Relatives post pictures of their missing loved ones in kiosks in their home towns while those who can afford it travel to Cattaneo’s lab to find answers. Journalist Greta Privatera hears their stories and asks why westerners who have seen families fight tirelessly to find missing relatives after 9/11 or the 2004 Boxing Day tsunami fail to imagine that the families of Eritrean, Senegalese or Syrian people are desperately looking for their loved ones too.

There was an Eritrean girl who travelled here from Stockholm. She was looking for her brother who had been with his wife and children on a boat from Libya headed to Sicily. She sat on the chair in front of the doctors, and asked to see the photographs of the bodies found at sea as well as the personal effects that were collected. She was working her way through the pages, slowly. Then she stopped on a scrap of paper covered with scribbled telephone numbers. She said: “This is my brother’s handwriting, I’m sure of it.” She kept reading, opened her eyes wide and burst into tears. Among all of the phone numbers, she saw her own. She had found her brother.

This is one of dozens of stories relayed by Cristina Cattaneo when we meet in downtown Milan. She is a professor of legal medicine at the University of Milan (known locally as UniMI or Università Statale di Milano), and is the director of LABANOF, the Laboratory of Forensic Anthropology and Odontology, based on campus. It is the only laboratory in Europe that works to identify migrants who have gone missing in the Mediterranean. 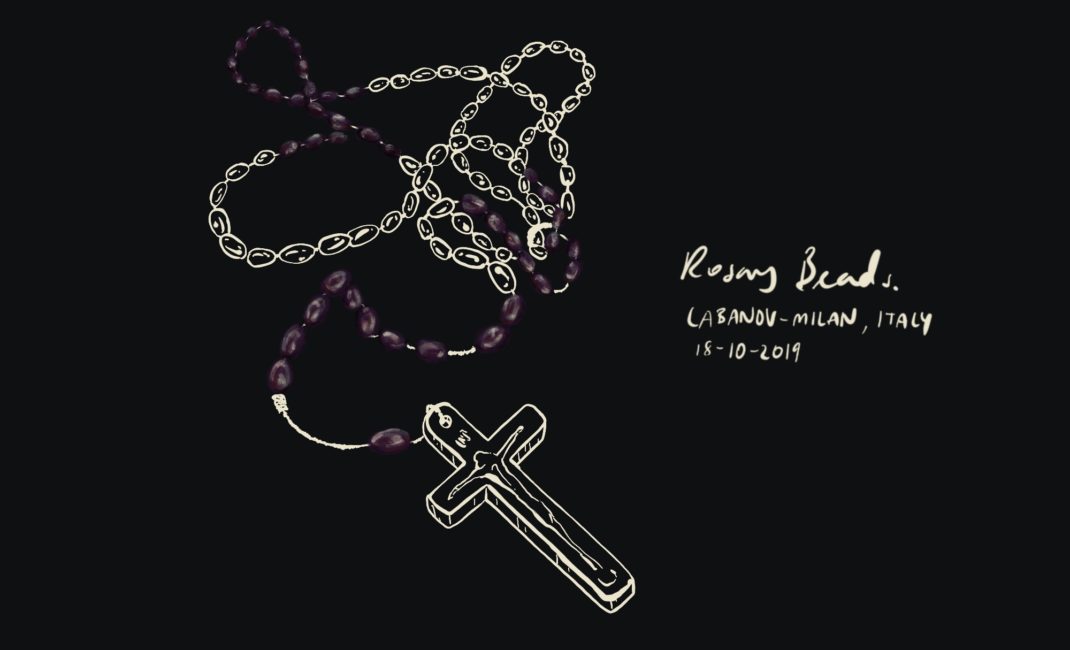 Rosary beads, based on photographs by Stefano Schirato.

Cattaneo, author of Naufraghi senza volto and Corpi, scheletri e delitti: Le storie del Labanof (Bodies, skeletons and murders: the Labanof stories), has dedicated her life to the dead. Her interest in the dead started when she was just seven years old after the death of her neighbour. She had so many questions about what had happened to him, but her mother’s answers left her unsatisfied. From that moment on, her desire to investigate grew. She graduated in medicine and surgery from the University of Milan, and then specialised in legal medicine. In 1995 Cattaneo became the Head of LABANOF, which deals with missing people and bodies which haven’t been identified. Over the course of her career she has worked on autopsies of important cold cases in Italy, such as Stefano Cucchi, the young man who died in prison in 2009, but in 2013 her attention was drawn to the story of people trying to reach Europe.

Read more: How refugees are living in limbo at an asylum centre in Italy

On the night of October 3, when a boat carrying nearly 400 people capsized off the coast of the Isola dei Conigli, in Lampedusa, only 366 corpses were recovered, and Cattaneo began researching the identities of the dead by studying their DNA and analysing their remains and personal effects.

“That episode unleashed the solidarity of many and pushed the authorities to move in different directions,” she says. The International Committee of the Red Cross asked Cattaneo to help organise a network of immigration authorities in countries around the Mediterranean to name the people who have lost their lives at sea. She accepted.

Victims on these kind of boats were certainly not new, but this disaster shook our consciences more than any other,” she says. “It is fundamental to give a name and a story to those who are no longer here. It’s essential for those still living. Relatives need it to process their mourning, otherwise they go crazy. Think about the mental health of a mother who does not know if her child is dead or alive, or of orphans who without a parental death certificate, are unable to reunite with relatives in Europe.”

With the help of collaborators, and funded by the Commissario Straordinario per le Persone Scomparse (the Italian government’s Special Commissioner for Missing Persons), she got to work. 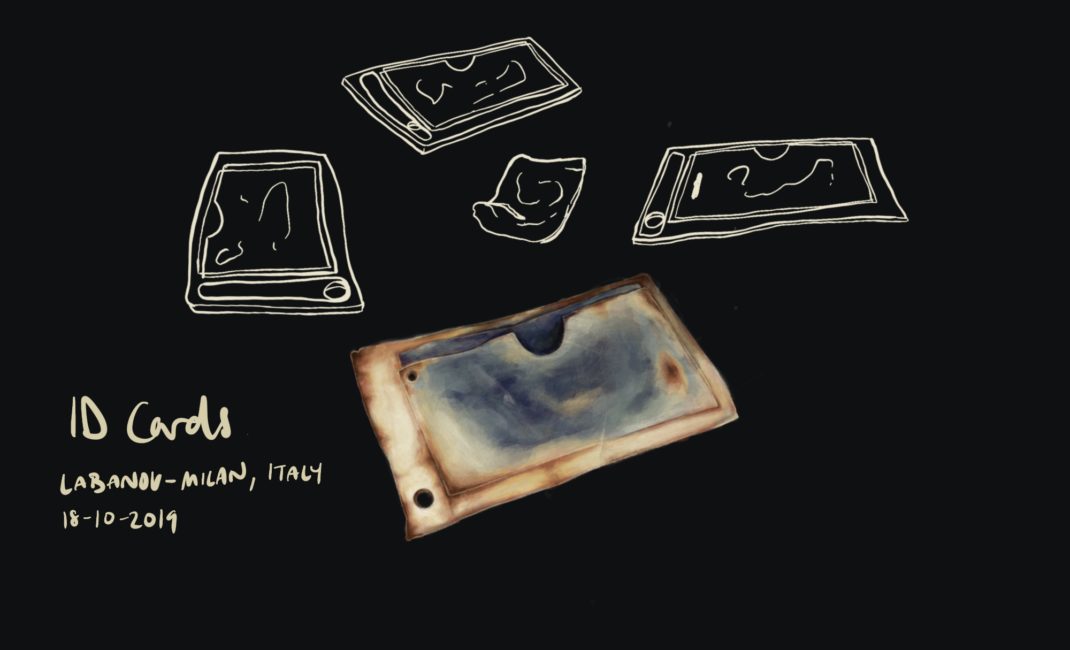 ID cards, based on photographs by Stefano Schirato.

In the western world we have seen families fight tirelessly to find missing relatives after extraordinary events such as 9/11 or the 2004 Boxing Day tsunami. Why, then, do we fail to imagine that the families of Eritrean, Senegalese or Syrian people are desperately looking for their loved ones too? The truth is that there are thousands of African and Middle Eastern families who are still waiting to know what happened to their loved ones and who will go to great lengths to find answers.

In some villages in Eritrea, for example, the International Committee of the Red Cross has dedicated kiosks where they collect details about missing relatives, and then cross-reference with information cataloged by operations such as LABANOF. These local kiosks are essential because many families do not have enough money to travel to Europe and Italy in search of their relatives.

Thousands of African parents don’t even know that our laboratory exists, and that’s why it should be institutionalised in Europe,” says Cattaneo. “Every country should have one and each should be connected to a centralised institute that manages all this information. I hope that this dream will come true one day.”

The majority of the relatives that Cattaneo has met – and she has met hundreds of them – are people who live in Europe and come to Italy in search of news on behalf of the family in their country of origin. One such relative was an aunt originally from Eritrea who now lives in Switzerland, and lost all contact with her nephew.

“I don’t understand,” she said as soon as she was in front of Cattaneo and her team. “Immediately after the shipwreck in Lampedusa someone collected DNA from my brother’s son, saying that it would be used to identify the body, but then what was done?”

Often Cattaneo’s responses are not enough to appease the anger of people who understand the injustice, as in this case.

“This aunt was right,” says Cattaneo. “How could we tell her that everyone had forgotten to identify her relative?” Her beloved nephew had just graduated and fled Eritrea in search of a better life in Europe.

When we gave her the photographs of the deceased, she stopped at the fourth one and broke into a silent cry,” says Cattaneo.

“Samuel, Samuel, Samuel,” she kept repeating. After a few minutes of sobbing, she tried to compose herself. She took a deep breath and moved onto the next step in her mission. That woman wasn’t just there for Samuel.

“She wasn’t done yet,” recalls Cattaneo. “Another mother, her friend, also did not know what had happened to her son.”

The woman produced a lock of her friend’s hair rolled up in a sheet of paper, explaining to Cattaneo that she hoped it would be useful for identifying the DNA of the missing young boy. Cattaneo’s team took it and catalogued it. 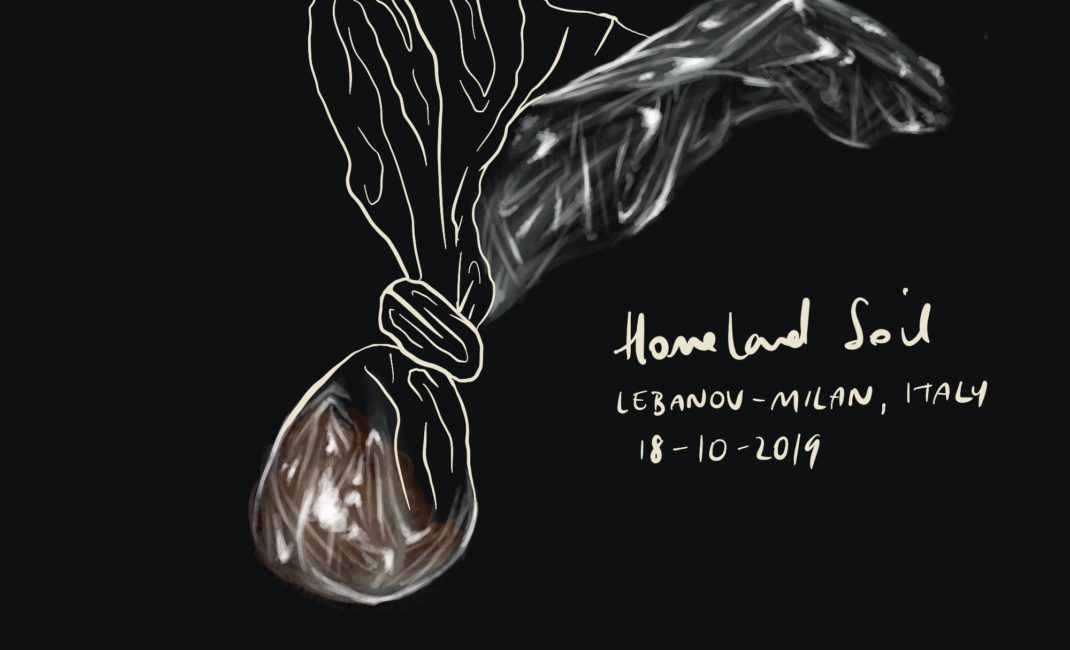 A bag of homeland soil based on photographs by Stefano Schirato.

Every parent, brother or sister that Cattaneo has met, has become a story that is now part of her, just like the story of a Somalian girl who won a scholarship from a prestigious European university. She took a chance and sailed towards Italy on a “death boat” as she did not have the money to pay for a flight. She didn’t make it to university as she drowned in the Mediterranean Sea. Or the story of a man with no more hope in his eyes whose only mission was to bring his wife’s body home.

Read more: What do 270 migrant and refugee interviews reveal about Europe’s approach to migration?

“I remember a Syrian doctor who arrived with his wife,” Cattaneo says. “They had long been looking for their children. They painstakingly told us how they lost sight of them as the ship sank. They gave us their DNA, and photos of the three little girls who were playing happily in their home in Damascus,” she continues. “They looked at the photos of the dead we had, but their girls were not here. They had already contacted Malta, but they weren’t there either. With painful precision, the doctor wrote on a sheet of paper: 300 people had boarded the boat, 22 bodies had been found by the Italians, 18 from Malta. He put the two digits one above the other and subtracted them, drew a line and under it and he wrote in capital letters: 260 still on the seabed. We were devastated.”

“But I can’t forget the day I discovered a booklet well sewn in the pocket of a pair of pants of a 14-year-old from Mali. I carefully cut around, peeled it off and read: ‘Bulletin scolaire and the slightly faded words mathématiques, sciences physiques.’ It was a report card. It was the most precious thing he had, his dreams. He wanted to go to school and live in a country of peace.”

This boy ended up at the bottom of the sea. 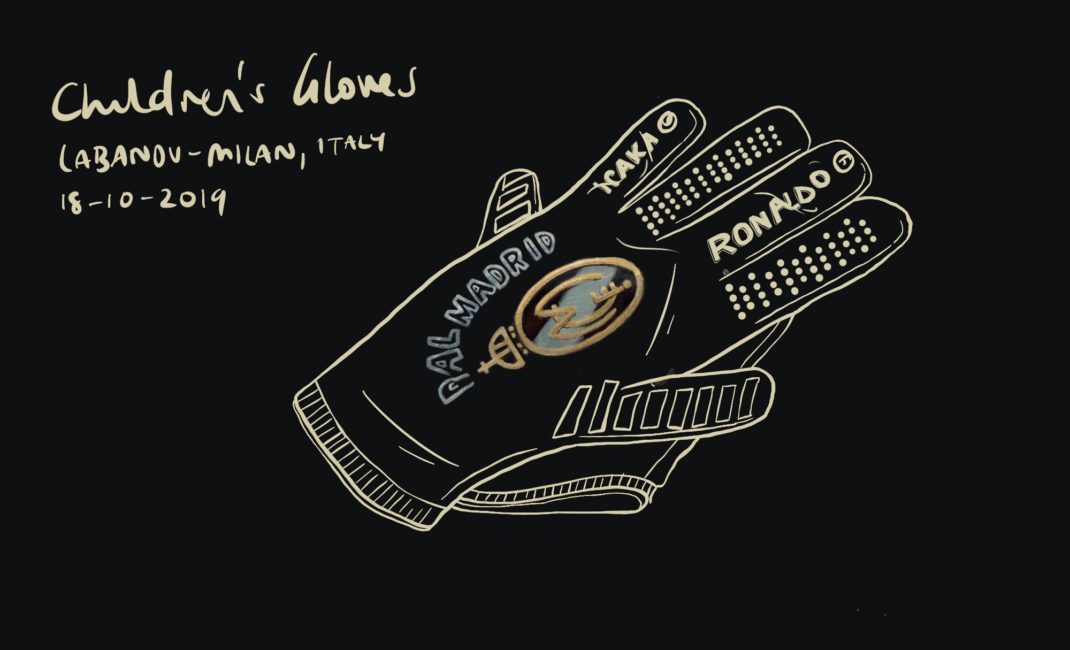 A pair of child’s gloves based on photographs by Stefano Schirato.

One scene that Cattaneo shared, better than any other, illustrated the injustice these bereaved families face.

“Outside of the laboratory, there was an elderly man sitting in a chair, he was holding our letter, we invited him to identify his missing relatives. He was waiting in silence for his turn while images of the Germanwings disaster – the one in which a co-pilot took control of the plane and crashed into the French Alps killing 150 people – were scrolling on the TV hanging on the wall. The man stared at the progress of the rescuers and the interviews with parents and children of the victims who told their stories to the world. He seemed to recognise the pain in their faces, it was very similar to his.”

There was only one enormous difference: in two days their deceased had all been identified, they had a name and a place to return to, but, a year and a half after the sinking of a boat in Lampedusa on October 3 2013, that man and the others in the room with him were still waiting and hoping to find out what happened to their children.

This particular image is stuck in my mind because to me it is a symbol of what these families are forced to go through,” Cattaneo says. “Not only must they resign themselves to the fact that they will no longer see their loved ones and that, in many cases, they will not have a grave to cry on, they must accept that even in death, their children are considered to be second-class citizens.”

In the Mediterranean Sea “there have been at least 30,000 victims, and it is only the tip of the iceberg. It is the largest humanitarian disaster in the post-war era,” says Cattaneo. “Millions of men and women have left everything they had to try to save themselves from war, hunger and poverty.

“Giving a name to the dead is our duty. We have managed to collect the data of nearly 1700 missing persons, but there is more to do, and we need help.” 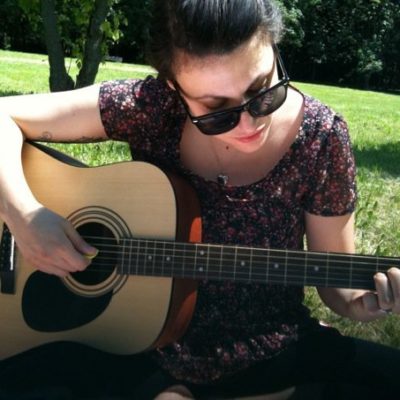